[Paper] Summary of Explaining by Removing: A Unified Framework for Model Explanation

Before this paper you had to understand 25+ seemingly very different feature importance methods, but now you just need to understand that you can combine 3 different choices of functions to cover the space of removal-based explanations.

caveat: It may still be beneficial to understand the peculiarities of each feature importance algorithm for computational complexity and efficient implementation reasons.

I predict this will be an influential paper with many citations to come… let’s see in 5 years!

Tbh, this summary doesn’t add much, if anything, to the paper. It’s more pointers for me in the future. If you have time on your hands, read the paper instead.

Our framework is based on the observation that many methods can be understood as simulating feature removal to quantify each feature’s influenceon a model.

The most active area of research in the field is local interpretability, which explains individual predictions, such as an individual patient diagnosis […]

in contrast, global interpretability explains the model’s behavior across the entire dataset

Both problems are usually addressed using feature attribution, where a score is assigned to explain each feature’s influence.

One can find in the explainability literature 25 methods which are removal-based: 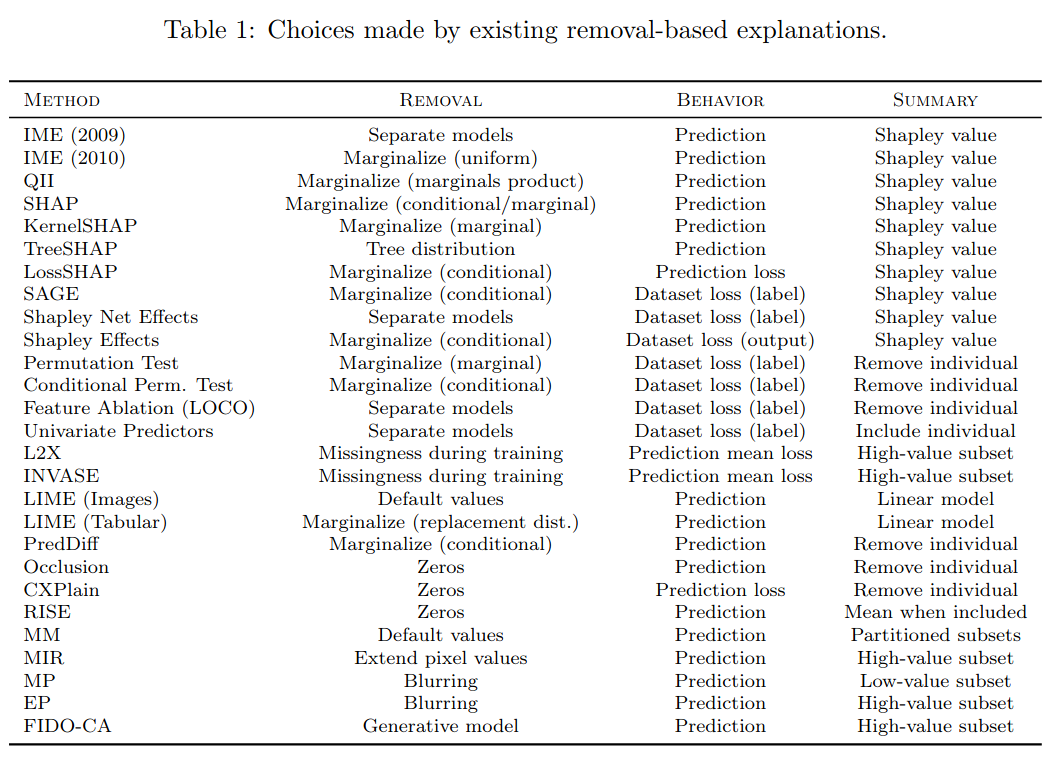 These methods include many of the most widely used approaches (e.g. LIME and SHAP).

These methods are determined by three choices:

The first of the three choices.

A few formal definitions are needed.

The space of all such subset functions is denoted $\mathfrak{F}$.

To be interesting to explain a model $f \in \mathcal{F}$, a subset function $F \in \mathfrak{F}$ must be an extension of $f$.

Then, removing features from a machine learning model can be understood and written in terms of the above formalism:

We conclude that the first dimension of our framework amounts to choosing an extension $F \in \mathfrak{F}$ of the model $f \in \mathcal{F}$.

various choices of target quantities [can be observed] as different features are withheld from the model.

In fact, removal-based explanations need not be restricted to the ML context: any function that accommodates missing inputs can be explained via feature removal by examining either its output or some function of its output as groups of inputs are removed.

Many methods explain the model output or a simple function of the output, such as the log-odds ratio. Other methods take into account a measure of the model’s loss, for either an individual input or the entire dataset.

The model behavior can be captured by a function $u : \mathcal{P}(D) \rightarrow \mathbb{R}$.

For example, it can be

The third choice for removal-based explanations is how to summarize each feature’s influence on the model.

The set functions we used to represent a model’s dependence on different features (Section 5) are complicated mathematical objects that are difficult to communicate fully due to the exponential number of feature subsets and underlying feature interactions. Removal-based explanations confront this challenge by providing users with a concise summary of each feature’s influence.

Both approaches provide users with simple summaries of a feature’s contribution to the set function.

Given this formalism, we can re-interpret many of the known methods (the removal-based ones):

These feature selection explanations are essentially coarse attributions that assign binary importance rather than a real number.

In fact, without making any simplifying assumptions about the model or data distribution, several techniques must examine all $2^d$ subsets of features.

Strategies that yield fast approximations include:

The set function $u$ whose purpose is to explain the model $f$ can be interpreted as a cooperative game (defined the same way, as a function $u: \mathcal{P}(D) \rightarrow \mathbb{R}$) which describes the value achieved when sets of players $S \subseteq D$ participate in a game.

The Shapley values $\phi_i(u) \in \mathbb{R}$ stem from this field, and are the unique allocations (vectors $z \in \mathbb{R}^d$ that represent payoffs proposed to each player in return for participating in the game) that satisfy the following properties:

Banzhaf value $\psi_i(u)$ is the average marginal contribution of player $i$ in the cooperative game $u$.

The methods discussed thus far (Shapley value, Banzhaf value, removing individual players, including individual players) all satisfy the symmetry, dummy, additivity, and marginalism axioms. What makes the Shapley value unique among these methods is its efficiency axiom, which lets us view it as a distribution of the grand coalition’s value among the players (Dubey and Shapley, 1979).

These results show that the weighted least squares problem solved by LIME provides sufficient flexibility to express both the Shapley and Banzhaf values, as well as simpler quantities such as the marginal contributions from removing or including individual players. The LIME approach captures every feature attribution technique discussed so far

We have thus demonstrated that the LIME approach for summarizing feature influence not only has precedent in cooperative game theory, but is intimately connected to the other allocation strategies.

This suggests that the feature attributions generated by removal-based explanations should be viewed as additive decompositions of the underlying cooperative game $u$.

For cooperative games, excess measures the degree of unhappiness of players in the coalition: The higher the excess, the more the players feel cheated…

… and may refuse to take part in the game any longer. “We have no analogue for features refusing participation in ML, but the notion of excess is useful for understanding several removal-based explanation methods.” [pun of the authors]

Similar relations to the notion of excess can be derived for the feature selection methods discussed above. The paper describes them formally.

By reformulating the optimization problems solved by each method, we show that each feature selection summarization can be described as minimizing or maximizing excess given equal allocations for all players. In cooperative game theory, examining each coalition’s level of excess (or dissatisfaction) helps determine whether allocations will incentivize participation, but the same tool is used by removal-based explanations to find the most influential features for a model.

Finally, feature selection explanations provide only a coarse summary of each player’s value contribution, and their results depend on user-specified hyperparameters.

Each method’s summarization technique can be understood in terms of concepts from cooperative game theory: 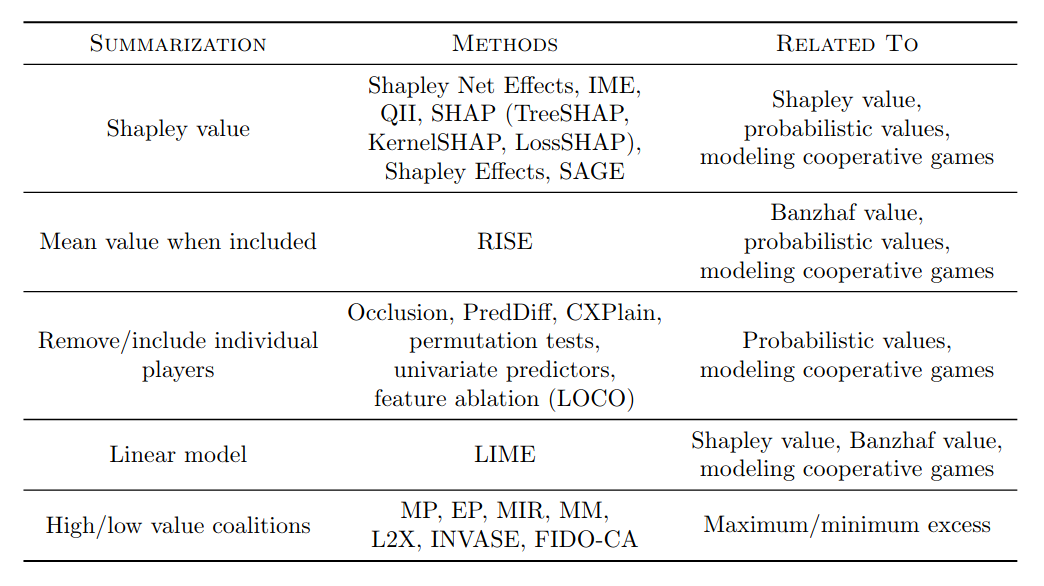 Here, authors show that probability axioms (countable additivity) and the Bayes rule are constraining the set of subset functions. Some will not yield a valid set of conditional distributions:

Constraining the feature removal approach to be probabilistically valid ensures that the model extension $F$ is faithful both to the original model $f$ and to an underlying data distribution.

A subset function $F \in \mathfrak{F}$ is deemed consistent with a data distribution $q(X)$ if it does not violate the countable additivity and the Bayes rule.

The authors shows that there is a unique extension $F \in \mathfrak{F}$ of a model $f \in \mathcal{F}$ that is consistent with a given data distribution $q(X)$ (cf. Propositions 6 and 7 in the paper).

This unique extension is given by

That is, if the true data distribution is $p(X)$, a consistent approach with $p$ would be to marginalize the variables. However, estimation of the conditional probability for any subset of variables is hard, and in practice one has to use approximations or assumptions such as:

This discussion shows that although few methods suggest removing features with the conditional distribution, numerous methods approximate this approach.

Training separate models should provide the best approximation because each model is given a relativelysimple task, but this is also the least scalable approach for high-dimensional datasets.

We conclude that, under certain assumptions (feature independence, model optimality), several removal strategies are consistent with the data distribution $p(X)$. 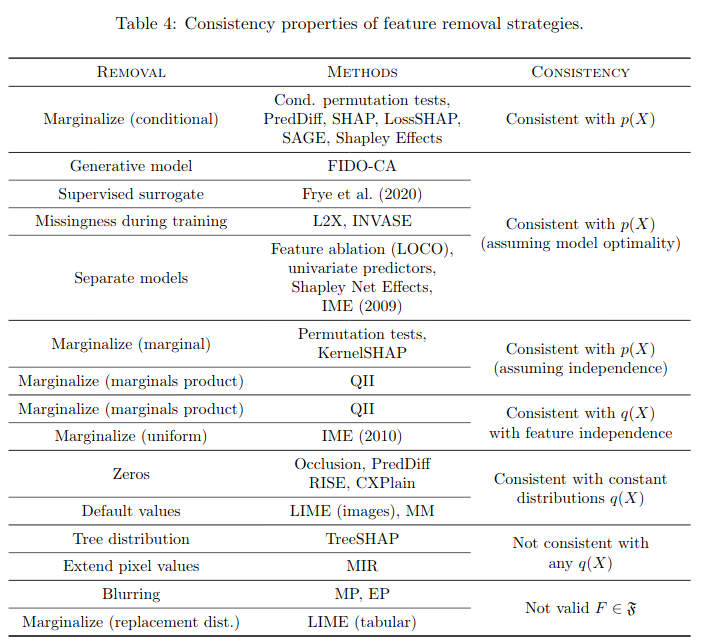 Conventional wisdom suggests that explanation methods quantify the information contained in each feature. However, we find that precise information-theoretic connections can be identified only when removed features are marginalized out with their conditional distribution. 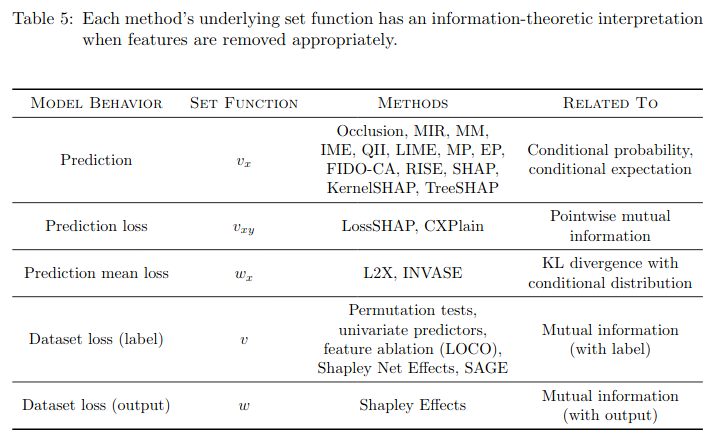 we can view these information-theoretic quantities as the values that each set function approximates.

No single set function provides the “right” approach to model explanation; rather, these information-theoretic quantities span a range of perspectives that could be useful for understanding a complex ML model.

using ML as a tool to discover real-world relationships.

9. A Cognitive Perspective on Removal-Based Explanations

In summary, Norm theory provides a cognitive analogue for removing features by averaging over a distribution of alternative values, and the downhill rule suggests that the plausibility of alternative values should be taken into account. These theories provide cognitive justification for certain approaches to removing features, but our review of relevant psychology research is far from comprehensive. However, interestingly, our findings lend support to the same approach that yields connections with information theory (Section 8), which is marginalizing out features according to their conditional distribution.

Put simply, an explanation that paints an incomplete picture of a model may prove to be more useful if the user can understand it properly.

Can check code to get a more practical understanding:

To cover a wide range of possible methods, we consider many combinations of removal strategies (Section 4), model behaviors (Section 5) and summary techniques (Section 6).

we implemented 80 total methods (68 of which are new)

According to Figure 9, the surrogate and Shapley value combination performs best overall; this method roughly corresponds to SAGE (Covert et al., 2020), although it uses the surrogate as an approximation of the conditional distribution. 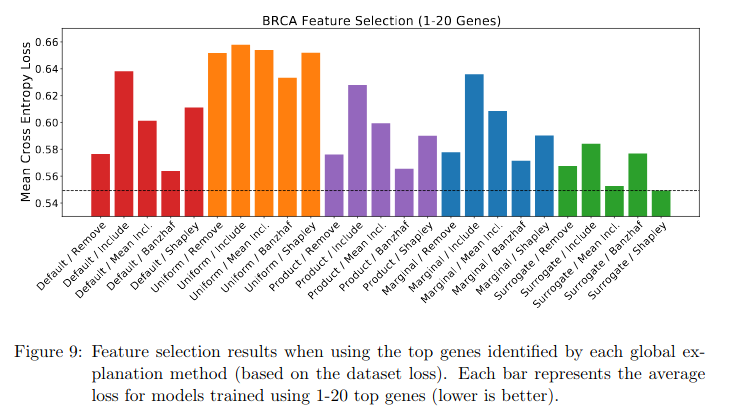 However, beyond confirming known relationships, we point out that these explanations can also be used to generate new scientific hypotheses.

[…] we found that multiple model behaviors can be understood as information-theoretic quantities. These connections require that removed features are marginalized out using their conditional distribution

[…] users will not always want information-theoretic explanations. These explanations have the potentially undesirable property that features may be deemed important even if they are not used by the model in a functional sense

The unique advantages of different methods are difficult to understand when each approach is viewed as a monolithic algorithm, but disentangling their choices makes it simpler to reason about their strengths and weaknesses and potentially develop hybrid methods (as demonstrated in Section 10).

future work will be better equipped to (i) specify the dimensions along which new methods differ from existing ones, (ii) distinguish the substance of new approaches from their approximations (to avoid presenting methods as monolithic algorithms), (iii) fix shortcomings in existing explanation methods using solutions along different dimensions of the framework, and (iv) rigorously justify new approaches in light of their connections with cooperative game theory, information theory and psychology.

Books to read to get up to speed with the theory: